FVC is a test where a patient needs to expire as hard and fast in the spirometer as possible.

The results of the test are compared to the predicted values that are calculated from his age, size, weight, sex and ethnic group.

Two graphs are shown after the test: the flow-volume loop and volume-time curve. 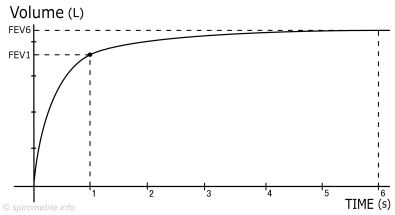 The FEV1% is the FEV1 divided by the VC (Vital Capacity: see next spirometry test on this page) times 100: FEV1%=FEV1/VC X100. This parameter is also known as the Tiffeneau index, named after the french physician that discovered the FEV1/VC ratio. Nowadays FEV1/FVC X100 is also accepted as FEV1% (FEV1/FVC ratio).

A healthy patients expires approximately 80% of all the air out of his lungs in the first second during the FVC maneuver.

A patient with an obstruction of the upper airways has a decreased FEV1/FVC ratio.

A FEV1% that is too high is suggestive for a restriction of the pulmonary volume.

After 6 seconds a second parameter is obtained: FEV6. This is more and more used as an alternative for FVC. FEV1/FEV6 can than be used in stead of FEV1/FVC. 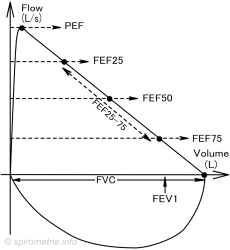 The flow-volume loop is the most important graph in spirometry.

A Flow-Volume loop begins at the intersection of the X-axis (volume) and Y-axis (flow): at the start of the test both flow and volume are equal to zero. Directly after this starting point the curve rapidly mounts to a peak: Peak (Expiratory) Flow. If the test is performed correctly, this PEF is attained within the first 150 milliseconds of the test. The Peak Flow is a measure for the air expired from the large upper airways (trachea-bronchi).

After the PEF the curve descends (=the flow decreases) as more air is expired. After 25% of the total expired volume, the parameter FEF25 is reached.

Halfway the curve (when the patient has expired half of the volume) the FEF50 is reached: Forced Expiratory Flow at 50% of the FVC.

After 75% the parameter FEF75 is reached.

The mean flow between the points FEF25 and FEF 75 is also a very important parameter and is called the FEF2575. This is actually the first parameter that will decline in many respiratory diseases.

It is important to realise that there is no time axis on the flow-volume loop so one can not interpret time intervals. A healthy patient will expire between 70 and 90% of the FVC in the first second of the test. This means that he takes roughly about 5 seconds to expire the last 10 to 30 % of the FVC. The point where the FEV1 is reached is shown on the curve as an illustration.

When the flow reaches zero, the FVC is reached (Force Vital Capacity): the patient has blown out as much air as he can.

After this it is recommended that the patient makes a complete and forced inspiration (to obtain a closed flow-volume loop), but the test can be interpreted without this as well.

If the VC is different from the FVC a collapse of the small airways is suspected (if both tests were performed correctly). 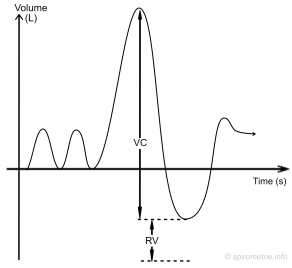 For this test the patient inspires and expires in the spirometer over and over again as fast as he can, during at least 12 seconds.

This is no longer a very common test as it can be dangerous for some people.

Sometimes the MVV is still performed in athletes.