A reversibility test is made to distinguish asthma from other causes of obstructive lung disease.

A reversibility test in spirometry usually follows the following steps:

Now we have 2 sets of flow-volume loops: pre-medication and post-medication. 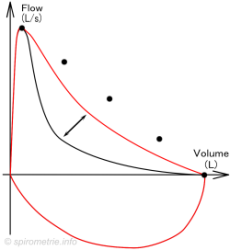 In case of asthma, a significant improvement in FEV1 will be seen after the intake of the bronchodilator. A significant rise in FEV1 is diagnostic for asthma.

If FEV1 has not risen significantly after the intake of the bronchodilator, the obstruction is likely to be caused by another pathology (like COPD) and other tests will be necessary to make a definite diagnosis. Asthma is still possible though!

A significant rise in FEV1 is interpreted differently in different parts of the world. Most commonly used is a rise of at least 12% and at least 200 mL compared to the pre-bronchodilator test. Others say FEV1 needs to rise at least 15%.