Quality Assessment of the Flow-Volume Loop

After a spirometry test one should first make sure that the test was done according to standard, before interpreting the results of the test.

The most important quality assessment can be determined by the shape of the flow-volume loop. A well executed test has the typical shape of a flow-volume loop: it starts at the point where the X-axis crossed the Y-axis and increases rapidly to the top or Peak Expiratory Flow. From there it declines more slowly in a more or less straight line to the X-axis. It is recommended to let the expiration follow by another complete inspiration to obtain a closed flow-volume loop. 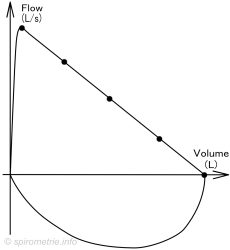 A frequent variation of the normal flow-volume loop is the so-called 'shoulder': a bulge to the outside, high on the curve. This shoulder is usually seen in spirometry loops from young females. 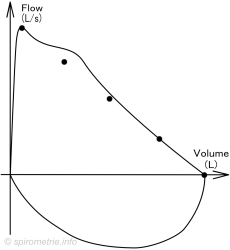 the 'shoulder' is a normal variation 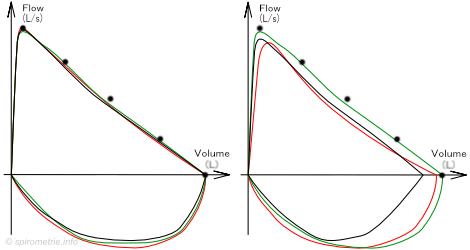 2 spirometry sessions: on the left the 3 performed tests are reproducible.
The tests in the session on the right are not.

Even if the patient's spirometry is normal (values are at least equal to predicted values) it is necessary to have him blow reproducible tests. This is important to be able to follow up the patient. If one would have suboptimal values it is impossible to assess the time trend of the patient over the course of years. A healthy patient can lose up to 25ml of FEV1 per year.

Nowadays it is recommended to perform at least 3 flow-volume loops of good quality and of which at least 2 are reproducible.

A spirometry test is not a simple test that the patient can easily do. Execution errors are not uncommon, especially in inexperienced patients.

These errors are reason to discard a test and let the patient repeat it.

Many patients get a coughing reflex during the forced expiration. The closure of the glottis causes the flow to suddenly fall to zero and rise again. 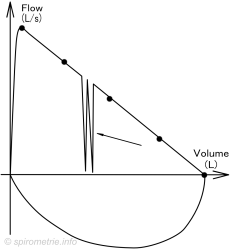 coughing during forced expiration:
the loop is interrupted because of a sudden stop of the flow

The highest point of the loop (Peak Flow) should be attained during the first 100 milliseconds. If this is not the case, the patient has not blown out fast enough. This is recognized by a rise in the curve that is too slow. 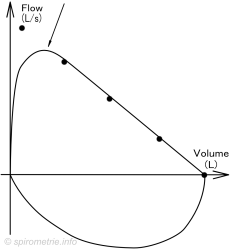 slow start:
the peak flow is not within the first 100 milliseconds and
there is no pointed, but a rounded top

This is often seen with a dent in the rising part of the loop, where the patient 'hesitated'. 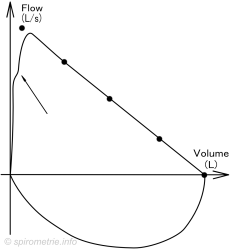 start is too slow:
the peak flow is not within the first 100 milliseconds and
there is a dent in the loop

Another example of a "hesitating" patient : 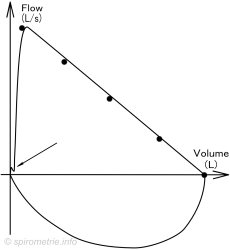 patient hesitated at the start of the flow-volume loop:
kink in curve

Correct execution of the maneuver requires that the lungs are fully emptied. If the patient does not go to the extreme to empty his lungs, the right part of the loop will make a sudden fall to the X-axis. The total expired volume (FVC) is underestimated. 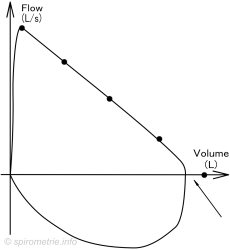 incomplete expiration:
a sudden drop at the right end of the loop,
the loop is 'cut off'

The importance of the second complete inspiration after the forced expiration lies in the quality control of the loop: if the patient inhales a larger volume after the forces expiration one knows that the lungs where not completely filled before the test. The end of the loop lies left of the Y-axis.

A difference of 5% between inspiration and expiration is allowed. 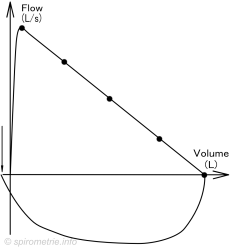 the patient did not fill his lungs completely before the test:
inspiration>expiration

The expiratory time can be assessed on the volume-time curve. According to the ATS criteria (American Thoracic Society) expiratory time should be equal to or exceed 6 seconds. This can extremely difficult for a healthy person and especially in children, so usually 3 seconds is set as a minimum. 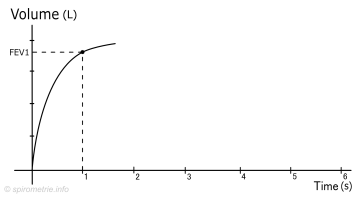 the patient expired less than 2 seconds:
the test should be repeated

Only if none of these errors occur, one can start interpreting the spirometry test.