Spirometry is a simple test to measure the function of the lungs. A spirometry test is used for diagnosis and monitoring of lung diseases.

On this site we will try to explain the different spirometry tests, the different measurement types used for measuring expired flows and volumes and give an introduction on interpretation of spirometry and the flow-volume loop.

Spirometry is getting more and more important, as respiratory diseases are increasing rapidly. Spirometry is the method of choice for a quick and reliable screening of obstructive lung diseases like COPD (Chronic Obstructive Pulmonary Disease) and asthma.

the evolution of mortality of the important chronic diseases:
only COPD mortality is increasing rapidly

Worldwide COPD is mortality cause n° 3 after ischemic heart disease and stroke. In the USA every 4 minutes someone dies from COPD!
Fortunately COPD can be avoided in most cases: 85-90% of COPD cases are caused by tobacco smoking.

It is very important that COPD is discovered as soon as possible. The graph below shows that spirometry is the prefered method for an early screening of COPD. Using spirometry one can discover COPD 10 to 15 years earlier than with the other conventional methods, like symptoms, blood gases and chest X-rays. 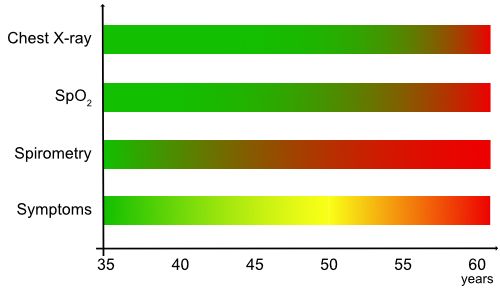 Spirometry is equally important in the diagnosis and follow-up of asthma and other respiratory diseases.

Considering the importance of respiratory diseases on public healthcare and the economy, it is clear that spirometry deserves a lot more attention as it is a simple and inexpensive test.